Inquire
OVERVIEW
This tour combine the spectacular natural sights in Guilin & Yangshuo with the classic attractions in modern metropolis Hong Kong. Go for it, you'll feel like bathing in deep river of history, culture & nature. 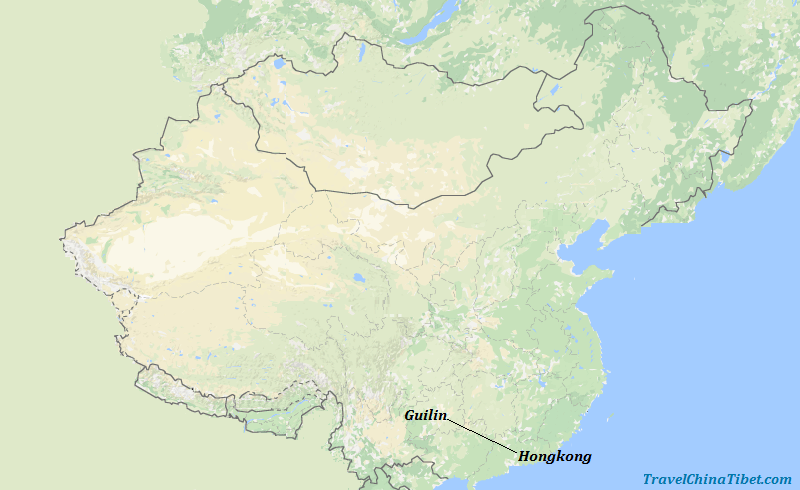 Accommodations: Overnight in HK and hotel arranged by you
Day 3Hongkong - Guilin
Transfer Via: Flight arranged by us

Highlights: Today you will arrange your own trasnfer to HK airport for the flight to Guilin. Upon your arrival in Guilin, the most scenic city in China, your personal guide will meet you and escort you to your hotel. The rest of the day is yours to relax. Evening if time permits, you can walk leisurely around the famous city water system--Two Rivers and Four Lakes for amazing night views.

Two Rivers and Four Lakes: Which is refers to the water system consisted of Li River, Peach Blossom River, Wooden Dragon Lake, Othmanthus Tree Lake, Banyan Tree Lake and Fir Tree Lake that surrounding the downtown Guilin. A walking tour or a boat tour through the area is definitely a highlight, it is extremely beautiful with evening lights.

Highlights: After breakfast, you will be driven to Zhujiang Pier (40-minute drive) to start your boat cruise down the picturesque Li River. After checking into your hotel, the rest of today you will cycle to Yangshuo's beautiful countryside, cycling along the famous Yulong River is a fatastic experience to enjoy the countryside views. You will also pay a short visit to a local farmer's house to learn their daily life.

Li River Cruise: As one of the most famous river cruise in China, the Li River has attracted millions of visitors and celebrities from all parts of the world. During the 4 hours cruise, you will be inspired by breathtaking views of peaks and pinnacles, crystal-clear water and picturesque pastoral views of rice paddies, bamboo trees and water buffaloes. Visitors feel they have stepped into a traditional Chinese painting

Recommended paid add-on show: “Impression Third Sister Liu>”, Price: RMB268=USD45/per person for basic seat. (we do not include it because the availability is subject to the weather.)

Highlights: Drive 1.5 hours back to Guilin and visit the Elephant Trunk Hill, Reed Flute Cave. Then be escorted to airport for the flight to next city.

Elephant Hill: Which is situated at the junction of the Li River and Taohuajiang Rivers. Rising 55 meters above the water, the hill is a spectacular limestone karst formation with a naturally-shaped cave at the bottom. Look from distance, the hill is like a huge elephant drinking water from the river. As a symbol of Guilin, it is definitely a must see when visiting Guilin.

Reed Flute Cave: known as "the Palace of Natural Arts ” , Reed flute cave is located 5km away from downtown Guilin, and considered as one of the most extraordinary scenic spots in China. As "must-see" sights in Guilin, the cave is 240m long and 19 degrees centigrade all the year round. It is a magic fairyland of stalactites, stalagmites, stone pillars, stone curtains, etc. The cave is now equipped with artificial lighting system to emphasize visual effect.