A visitor to Lhasa will find that the traditional foods are rich in calories and often served very warm to combat the chilly atmosphere. However, visitors can also find foods that remind them of home. Along with traditional Tibetan foods, there are restaurants that serve Nepalese, Chinese, Indian, Sichuan, and even western foods on occasion. 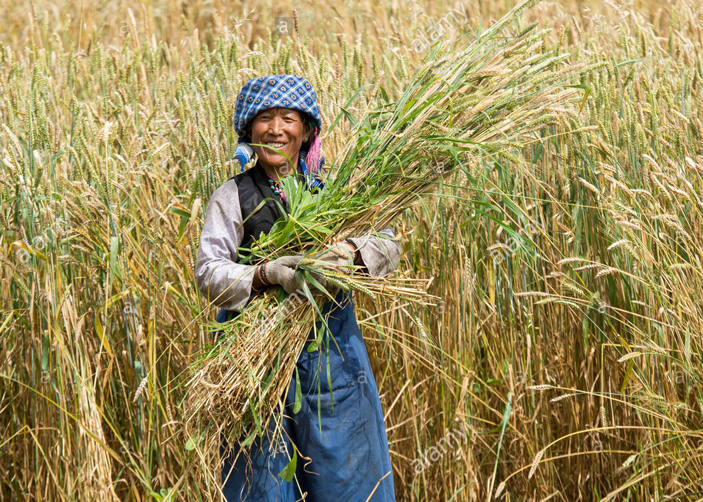 was spelled tsampa; it is made from roasted flour called nas, mixed and rolled into balls with the fingers of the right hand. It is often eaten when having tea. Once when visiting a Tibetan family in Qinghai, they worried that Americans do not like thick beverages and so the tea served us on that occasion was thin and calledboeja. It was loaded with butter and salt and milk, even some cream, and many in the room put their finger around the edge of the cup and rubbed the butter fat on the sides of their noses, their foreheads and on other dry skin places. That day, there was little zamba--no balls of roasted flour in sight. As is common in families, it came after several cups of tea were downed; and when it did, we each prepared our own. My ineptness generated the dozen people in the house to individually provide a lesson on technique. Not all were similar but the results were as if made by machine, perfectly round and all the same size, that of a small walnut. 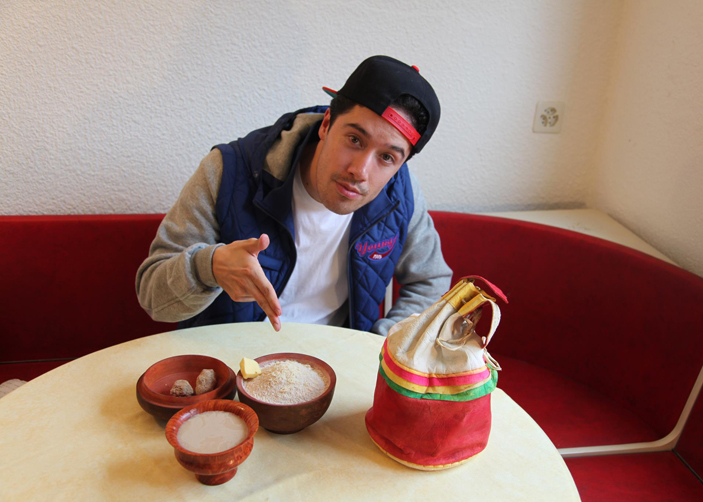 Yak meat is from a type of ox that has high withers, a broad back, big horns, and a hairy coat. It is an animal that does well in highland areas. Never served in any Tibetan home visited, were eggs, some say because they can not be sure of their fertility. This makes sense as their religion forbids killing even an insect because life is an interlude between successive rebirths. Most Tibetans also do not eat small animals as they consider it better to take the life of but one than many animals. They also do not eat fish, poultry, and pork. Monks and other religious folk do not eat onions, garlic, leeks, and other foods of this family, as well. The reason, this group of foods are not consumed is that they believe they raise sexual energies, an item not needed for the celibate. 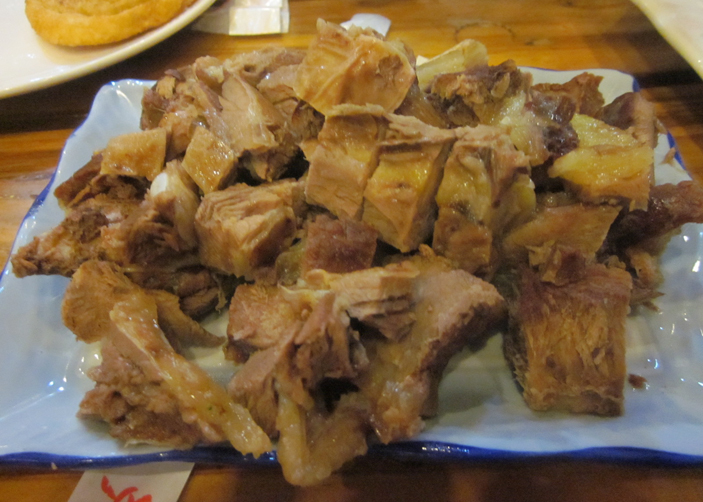 Sausage was early from more than 1000 years a ago. It is a food created by nomad. The main method is to prime different materials into the fresh animal guts such as sheep, pig or cow. According to different materials, the sausage can be divided into several categories. The sausage filling with sheep blood called Blood Sausage; and the one that stuffed with dogmeat named Meat Sausage; sausage which is filled with flour paste and edible oil is called Four Sausage; the one mainly filled with sheep fat together with some chopped meat named Oil Sausage; sausage stuffed with chopped animal liver called Liver Sausage. When out the stuffing in to the intestines, people will put some assistant ingredients such as salt, pepper powder, chopped ginger and so on. The Tibetan sausages can be either steamed or roasted and then cut into slices to eat. Tibetan usually make this food in batches during new-year time. The Tibetan sausage taste fresh and goluptious and not oily, which is a nice cold dish. Then it can be stored for about one year. 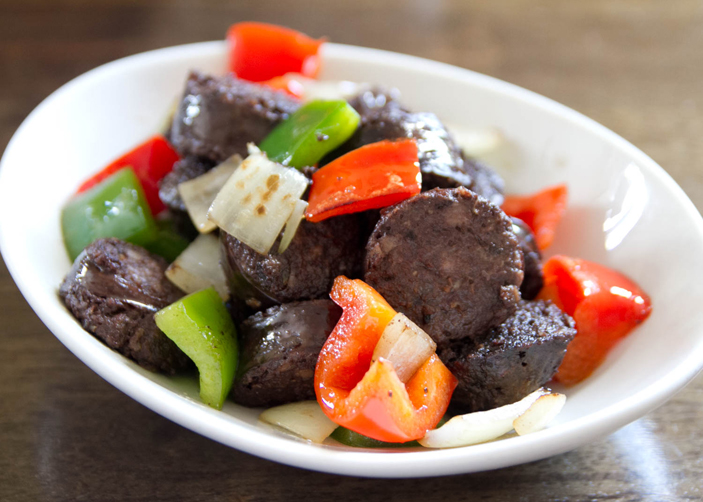 Tibetan bakemeat is very popular in Tibet. The fillings of the bakemeat major are yak meat. Chopped the yak meat and then mix round with chives to make the fillings. After the flours paste is ready, people can stuff the fillings into the paste and roll into cake shape, and then deep fry the cake in pan with edible oil until it is fully cooked. Tibetan-style bakemeat is savory with fresh but not oily meat and crisp skin. There is a small tip for having bakemeat: you would better finish them before they are cold down.

Tibetan Bun is a kind of familiar food among Tibetan of pasturing areas. The cooking processes can be generally divided into two steps. The first step is to prepare materials and make into raw bun. The fillings usually are chopped mutton or beef mixed with wine and flavorings and water. Then wrap the fillings with thin flour-paste. The second step is to steaming them until cooked. It will need about 10 to 20 minutes. The Tibetan buns having rich juice and small size is unique in taste. The bun made by shaman in Tibetan fanes are especially tasty. 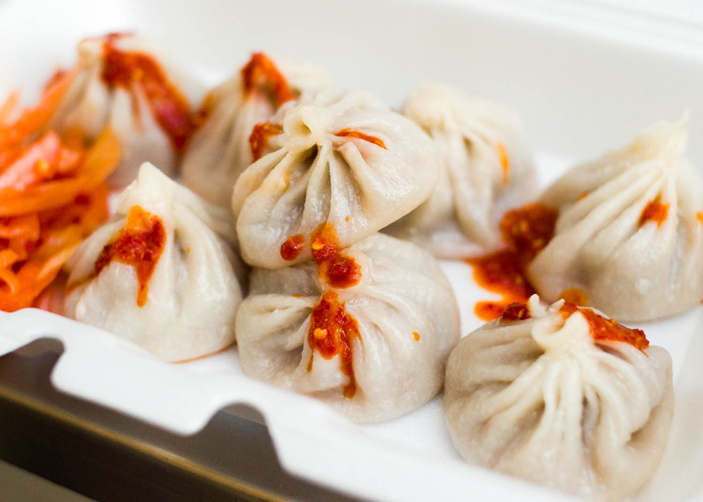 Tibetan porridge is boiled by the Tibetan style oatmeal. Tibetan people beat the highland barley into flat after marinating and then dry them under the sun. When the flats are dried, the Tibetan oatmeal is well done. About cooking methods: Tibetan persons like to put the subsidiary materials such as Ginseng Fruit, chopped meat (beef or mutton), milk segment into the porridge. Boil these assistant ingredients together with the Tibetan oatmeal to cook Tibetan porridge. The skilly is the traditional food in Tibetan New Year Festival. In the morning of the first day of every New Year, all Tibetan people will eat a bowl of hot porridge. They have the oat to impetrate smooth and good luck in the new year time. 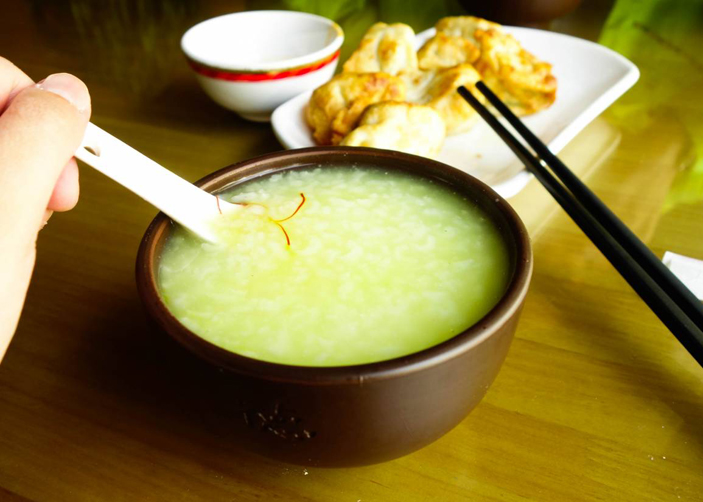 Tibetan bean noodles affected by Sichuan styles lean to piquancy. It is firstly thaw the starch by heating up, and then let it cool down to finalize the design. After added some salt, pimiento and other seasonings, the bean noodles is very nice. The taste of the bean noodles major is decided by the confection of the seasonings. Tibetan bean boodles are very popular among women and children. You will find these stalls in streets and lanes in Lhasa with simple Tibetan-style tables, or boards together with some age-old wooden stools. The holders of the booths almost are Tibetan women.

Tea is very popular in Tibet, they cannot live without tea. Tea can be processed into many different styles. The most popular tea in Tibet is butter tea, milk tea, and pure tea. Butter tea is famous part of the Tibetan diet. Actually, there is no such thing as "yak butter tea" since yaks are male and do not produce milk. Females, called "dri", produce the milk. Butter is made by nomads using traditional wooden churns. Tibetans in towns and cities often will buy a machine that separates the milk into cream and butter. Tibetan butter is quite different than the butter used in western countries. The taste is quite strong...almost rancid at times. Butter is mixed with tea that is imported from China and with salt. The tea is more like a soup than a tea. In winter, after you dinked the butter tea, you will feel warm from heat to foot. No matter guests from faraway or familiar friends, the hosts will send you a cup of butter as soon as you enter the house. The guest needs to dip some tea with the ring finger of the right hand and lift the finger in the air to flip for three times before drinking.  No matter the age, every tibetan drinks several cups of butter-tea in the morning. With each sip, custom dictates the host refill the cup never leaving it empty. They also drink about the same amount in the evening, also whenever a guest stops by and at other times, too. Tibetans also drink pure tea and sweet tea. Sweet is to make the black tea out and put into the teapot and then add white sugar and milk into it. Pure tea is green tea served without refreshment.

Tibetan milk is from the yak and goat there. Tibetan products are one of the four treasures in Tibet. As there are lots of sheep and milch cow in Tibet, there are many milk products there. As the important foods for Tibetan, its milk products are famous for fresh. The most popular milk products are yoghourts and milk sediments. Yoghurts can also be divided into two sorts; one is cheese named "Da Xue" in Tibetan and the other is "E Xue". Tibetan cheese is made of milk that has been extracted the ghee and the other one is milk without extracting. Yoghurt is rich in nutrition and easy to assimilation, so it is very suitable for old persons and children. 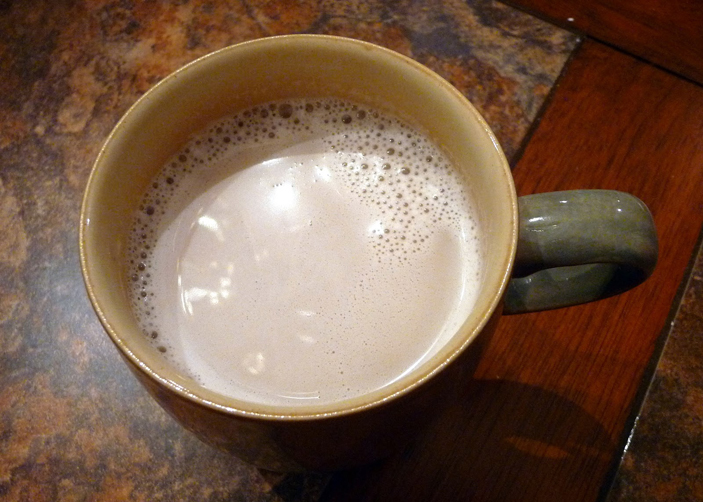 Chang is brewaged by zymolytic highland barley. Chang with low degree is popular among Tibetan including the young, the old, the female and the male. It is a kind of necessary drink at festivals, marriage feats and other important occasions. Before festivals, Tibetan people will brewage plentiful of barley wine. In the year, from April to August, Lhasa people will lift the nice wine gathers together in almost every traditional or non traditional festivals and religion or non religion festivals. All the people will bring the Chang to the green grass land, putting up colorful tents, drinking, singing and dancing. That scene fully shows out the charming of Tibetan culture. The Tibetan Chang is as well a nice product for entertaining guests. In banquets, the hosts will toast the guests until they are totally drunk. 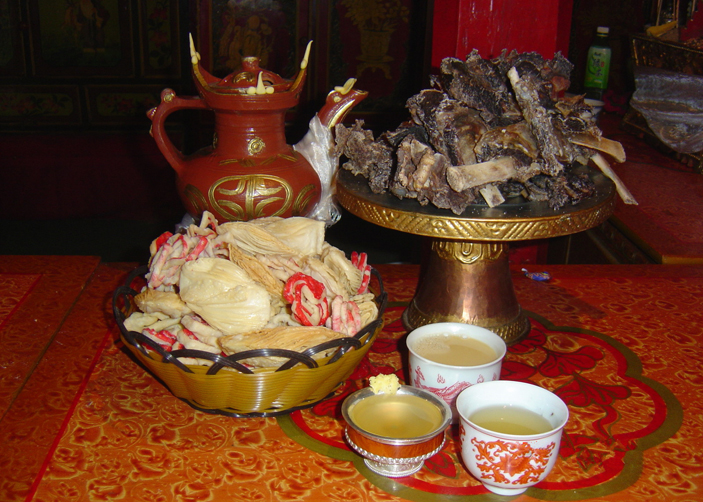