Lhasa, as the capital of Tibet Autonomous Region of China, has a history of over 1,300 years. It is the political, economic, cultural and transport center of the region.

Located at the bottom of a small basin surrounded by mountains, Lhasa has an elevation of 3,650 meters and sits at 91'06E and 29'36N, the center of the Tibet Plateau. Blessed with flat land and mild weather, Lhasa is free of frigid winters and unbearably hot summers, having an annual average daily temperature of 8 degrees C (43 degrees F). It enjoys 3,000 hours of sunlight annually, much more than all other cities in this regard, giving the city its title of "sunlit city." 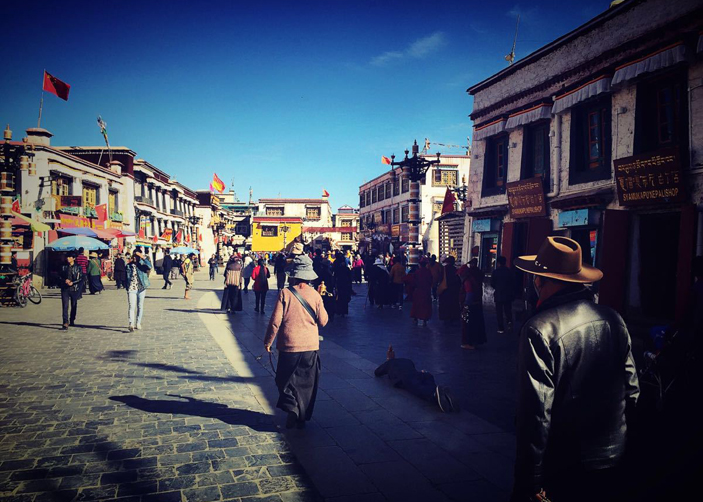 There are numerous distinctive local products in Lhasa. You should never miss the opportunity to buy the unique Tibetan things, such as Tibetan thangkas, silver ornaments, yak wool products. Thangka is a kind of Tibetan scroll painting that has strong ties to religion and features distinctive ethnic flavor. Some Thangkas are charming portraits of Buddhas, some are colorful representations of Tibetan customs and some retell the history of Tibet. Tibetan crafts are normally made from metals like gold, silver, copper and stones like turquoise, wood and bamboo as well as from the bones of dead animals. The Barkhor Street is a traditional Tibetan market where you will find thangkas, traditional Tibetan silver ornaments. Be sure to bargain with the vendors!

What to see in Lhasa

Lhasa, the capital of China's Tibet Autonomous Region, has a history of more than 1,300 years. It enjoys 3,000 hours of sunlight annually, much more than all other cities in this regard, giving the city its title of "sunlit city." Lhasa itself is a rich museum featuring ancient ruins, ancient architecture, ancient monasteries, ancient stone tablets and ancient gardens. The city boasts over 100 scenic spots altogether. These aspects combine to make Lhasa a great attraction in the world. The Potala Palace and Jokhang Monastery have been listed by UNESCO as world heritage site. The Lhasa River, known as the "merry blue waves," also attracts many visitors in and out of China.

Lhasa experiences 4 distinctive season decision; the weather is mild and possible to travel all the year round. Rainy and dry seasons are the most easily identified, and winter can be very cold and snowy.   The yearly highest temperature is 29 ℃ and the lowest is -16.5 ℃, annual average daily temperature of 8 ℃, the annual sunlight is 3,000 hours  and annual precipitation of 500 mm.  On average, the hottest months of the year are June and July. Lhasa’s summer months are never very hot, but strong and bright sunlights, so bring sunscreen and sunglasses is wise. And the evening temperature can be down to -50’s, so make sure you have suitable clothing with you if you are traveling to Tibet.

The best time to travel around Tibet is between April and October; the peak season is from May to September.

The rainy season is mainly in from July to early September, which is the summer and autumn of Tibet, but these months are the best seasons of the year, when it rains mostly at night, and is sunny in the daytime.

December to January is the coldest months of the year, the daily high temperatures is about 40’s, and the nighttime temperatures will down to 10’s.  Most of visitors choose to visit Tibet in summer or autumn, and traveling from middle of Sept to middle Oct is considered the best weather and the most beautiful scenery. But some do not scare of the coldness will come in winter as it is cheap price and good view too.

Lhasa, as the capital city of Tibet, is also the transportation hub in Tibet. AlthoughTibet is becoming more and more accessible, Lhasa is still the main entry and exit point on this high land. Sometimes, Lhasa is the only choice for outside visitors. The transportation system in the city has been updated as the development of Lhasa. It consists of air, railway and highway networks. In recent years, especially after the construction of Qinghai-Tibet Railway, Lhasa is much closer with other parts of Chin as well as the other regions in the world. How to get to Lhasa? This is one of the most frequently asked questions among first-time travelers to Lhasa and Tibet. The answer is: Both domestic and overseas travelers can easily get access to Lhasa by air, train or coach, and vice versa.

Getting to Lhasa by Air

Gonggar Airport is situated in Gonggar County in Shannan, about 100 kilometers south of Lhasa. At an attitude of 3,600 meters, it is one of the highest airports in the world. Lhasa Gonggar Airport was opened in 1965, which is the first airport in Tibet region; what’s more, it is also the one that has the most flights in Tibet. Currently, the airport has flights to Beijing, Shanghai, Shenzhen, Hong Kong, Diqing, Chongqing, Guangzhou, Kunming, Chengdu, Lanzhou, Xian, Xining, Chamdo and Katmandu. Generally speaking, there are over 40 flights every week in Gonggar Airport.

Getting to Lhasa by Train

Lhasa Railway Station is located on Liuwu Village, Duilong Deqing County. It is at an altitude of 3,641 kilometers and also the largest station on the Qinghai-Tibet Line. Opened in July 1st, 2007, Lhasa Railway Station is an important hub connecting Lhasa with the rest part of China. There are 7 waiting halls as well as 10 lines including 8 passenger lines and 2 freight lines. You can travel to Lhasa by train from the following cities which operate daily trains to Lhasa: Beijing, Guangzou, Chengdu, Xian, Lanzhou, Xining and Golmud.

Getting around Lhasa by City Bus

As a city on the highland, the roads and streets in Lhasa are narrower than the cities on the plain area, thus the public transit system in this city is not so developed. There are only a few lines and the time interval is half an hour. Besides, there are private buses or jeeps on the streets which are the major transport form here.

Getting around Lhasa by Taxi

Lhasa is not a large city; however the city has 1,500 taxis. The starting fare is 10 yuan for 5 kilometers and then RMB2 per kilometer. Usually, the starting fare would be enough if you just travel within Lhasa City. As to the famous temples, like Drepung Temple, the driver may charge you about 20 yuan. Visitors are highly suggested to negotiate with the driver about the fare in advance.