Tibetan Buddhism is known for its rich mythology and iconography and for the practice of identifying the reincarnations of deceased spiritual masters. It begins in 641CE, is a form of Mahayana Buddhism that developed in Tibet and spread to neighboring countries of the Himalayas. Due to Tibet’s complicated location, Tibet Buddhism developed there for 14 centuries in relative isolation, unknown by the outside world.

Historically, "Tibet" refers to a mountainous region in central Asia covering 2.5 million sq km. Today, "Tibet" officially refers to the Tibetan Autonomous Region within China, which is about half the size of historical Tibet. 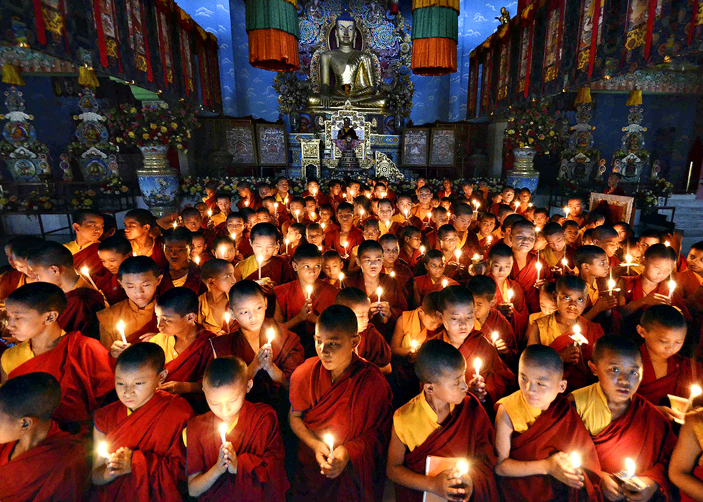 The Development of Buddhism

Around the first century BCE, a new form of Buddhism developed on the Indian subcontinent. It was called Mahayana (the “Great” or “Universal Vehicle”). The Mahayana movement brought a new religious ideal to Buddhism, that of the bodhisattva, an individual who works for the enlightenment and well being of all, not just for him or herself. This form of Buddhism spread throughout China, Korea, and Japan.

Several centuries later a third Buddhist denomination emerged in North India. Called Vajrayana (the “Diamond Vehicle”), it spread throughout the Himalayan kingdoms of Tibet, Nepal, Sikkim, and Bhutan, and northwards into Mongolia. The “diamond” in the name refers to the supreme clarity of its vision and its crystalline hardness and strength.

The Development of Tibtan Buddhism

Buddhism has a long history in Tibet. During the reign of Tibet’s first emperor, Songsen Gampo (ca. 600-650 CE), when Tibet first established itself as an independent kingdom and empire, the teachings of the Buddha were introduced to Tibet. It was another century before Buddhism began to flourish during the reign of three emperors: Tri Song Detsen (fl. 775), Tri Saynalek (fl. 812), and Tri Ralpachen (fl. 838). During that time great translation projects were undertaken so that Indian texts could be recorded in Tibetan, monasteries were built, and the royalty, nobility, and populace embraced Buddhism.

The last Tibetan emperor (reigned 838-842) was anti-Buddhist. He suppressed the religion, was assassinated as a result, and by the early 840s the royal dynasty collapsed. Tibet had a dark age of nearly two centuries – from 850 to the early 1000s. During this time, there was no central government. Although Buddhism in Tibet survived during this period, there were no monasteries or great translation projects, partly because there were no great patrons to support them.

The Four Schools within Tibetan Buddhism

There are four principal schools within modern Tibetan Buddhism:

Nyingmapa ("School of the Ancients") is the oldest of the Tibetan Buddhist schools and the second largest after Geluk. The Nyingma school is based primarily on the teachings of Padmasambhava, who is revered by the Nyingma school as the "second Buddha." Padmascambhava's system of Vajrayana or Tantric Buddhism was synthesized by Longchenpa in the 14th century. The distinctive doctrine of the Nyingma school is Dzogchen ("great perfection"), also known as ati-yoga (extraordinary yoga). It also makes wide use of shamanistic practices and local divinities borrowed from the indigenous, pre-Buddhist Bon religion. Nyingma monks are not generally required to be celibate.

Kagyüpa ("Oral Transmission School"; also spelled Bka'-brgyud-pa) is the third largest school of Tibetan Buddhism. Its teachings were brought to Tibet by Marpa the Translator, an 11th century Tibetan householder who traveled to India to study under the master yogin Naropa and gather Buddhist scriptures. Marpa's most important student was Milarepa, to whom Marpa passed on his teachings only after subjecting him to trials of the utmost difficulty. In the 12th century, the physician Gampopa synthesized the teachings of Marpa and Milarepa into an independent school. As its name indicates, this school of Tibetan Buddhism places particular value on the transmission of teachings from teacher to disciple. It also stresses the more severe practices of hatha yoga. The central teaching is the "great seal" (mahamudra), which is a realization of emptiness, freedom from samsara and the inspearability of these two. The basic practice of mahamudra is "dwelling in peace," and it has thus been called the "Tibetan Zen." Also central to the Kagyupa schools are the Six Doctrines of Naropa (Naro Chödrug), which are meditation techniques that partially coincide with the teachings of the Tibetan Book of the Dead.

Sakyapa is today the smallest of the four schools of Tibetan Buddhism. It is named for the Sakya ("Gray Earth") monastery in sourthern Tibet. The Sakya monastery was founded in 1073 by abbots from the Khön family. The abbots were devoted to the transmission of a cycle of Vajrayana teachings called "path and goal" (Lamdre), the systemization of Tantric teachings, and Buddhist logic. The Sakyapa school had great political influence in the 13th and 14th centuries.

Gelugpa (or Dge-lugs-pa or Gelukpa, "School of the Virtuous"), also called the Yellow Hats, is the youngest of the Tibetan schools, but is today the largest and the most important. It was founded in the late 14th century by Tsongkhapa, who "enforced strict monastic discipline, restored celibacy and the prohibition of alcohol and meat, established a higher standard of learning for monks, and, while continuing to respect the Vajrayana tradition of esotericism that was prevalent in Tibet, allowed Tantric and magical rites only in moderation." {1} Practices are centered on achieving concentration through meditation and arousing the bodhisattva within. Three large monasteries were quickly established near Lhasa: at Dga'ldan (Ganden) in 1409, 'Bras-spungs (Drepung) in 1416, and Se-ra in 1419. The abbots of the 'Bras-spungs monastery first received the title Dalai Lama in 1578. The Gelugpa school has held political leadership of Tibet since the Dalai Lamas were made heads of state by the Mongol leader Güüshi Khan in 1642. 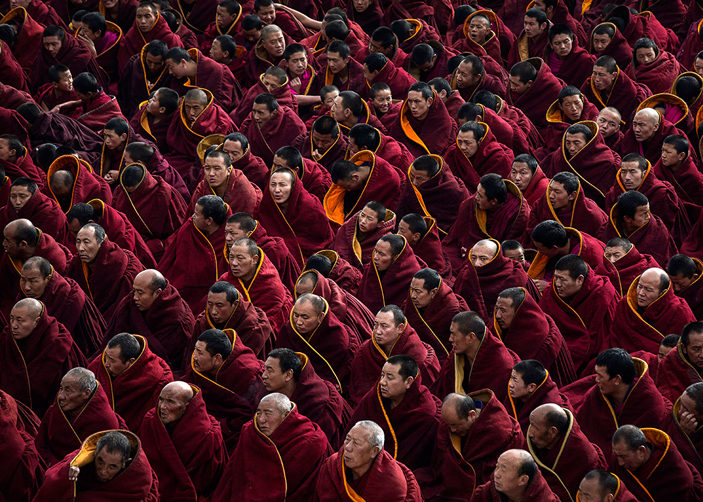 Over the centuries, lamas played increasingly important roles in Tibet, not just as religious figures, but also as political leaders. Often in Tibet’s history, a lama led the government. The first lama to do so was the Sakya patriarch Chögyal Pakpa (1235-1280), who was given his temporal authority through the patronage of the Mongol rulers of China. It was also through Mongol patronage that the Dalai Lamas or their representatives have ruled Tibet since 1642 (with one major interruption). They, too, are both religious and temporal leaders.

The last half of the 20th century has brought unparalleled changes to Tibet. The Communist government of China controls Tibet and under its rule Tibet’s religion and culture have suffered greatly. H. H. the Dalai Lama, spiritual and political leader of Tibet, has set up a government-in-exile in Dharamsala, India. Tibetan exiles have settled mostly in India but also in other countries such as Nepal, Switzerland, Canada, and the United States. H. H. the Dalai Lama has worked hard to bring the plight of Tibet to the world’s attention, and in 1989 his efforts gained him the Nobel Peace Prize. Since then, popular sentiment and political activism have increased in support of the restoration of Tibet. Embracing the values of compassion and wisdom, not all exiles view the loss of their homeland with anger and resentment. His Holiness Jigdal Dagchen Sakya, Head Lama of the Sakya Monastery of Tibetan Buddhism in Seattle, says that the changes in Tibet are an example of the true nature of human existence: all is impermanent, and everything changes.

Tibetan Buddhism has the following characteristics:

2) Most of the Tibetans are devout believers in Tibetan Buddhism.

3) It has a strong aura of mystique, particularly the reincarnation system of the Living Buddha, which is a unique characteristic of Tibetan Buddhism.

4) It emphasized self-cultivation according to rules and doctrines of Buddhism.

5) It has formed several sects, the major ones being the Ningma (Red) Sect, Kargyu (White) Sect, Sagya (Variegated) Sect and Gelug (Yellow) Sect.