Tibetan history can be traced back to thousands of year, with the written history dates back to the 7th century when Songtsan Gampo, the 33rd Tibetan king, sent his minister Sambhota to India to study Sanskrit who on his return invented the present Tibetan script based on Sanskrit.Tibet's history can be divided into 4 periods:

This period starts from Nyatri Tsanpo, the first of the Tsanpos, in 127 B.C (historians differ in view of the date, but this date is taken from the White Annales, a reliable book on Tibetan history) and ends in 842 A.D. at the death of Lang Dharma, the last of the Tsanpos, who was assassinated by a Buddhist monk owing to Lang Dharma's ruthless persecution of Buddhism. During this period some 42 Tsanpos had ruled over Tibet among which Songtsan Gampo's rule was considered as the zenith. Songtsan Gamoi was an outstanding ruler, he unified Tibet, changed his capital to Lhasa, sent Sambhota to India to study Sanskrit and promulgated a script for the Tibetan on the latter's arrival to Tibet, married Princess Wencheng of the tang Court and Princess Bhrikuti Debi of Nepal, built the Potala and the temple and the temple of Jokhang

2. The period of Decentralization

This period began in 842 A.D. the year of Lang Dharma's assassination, and ended in about 1260 A.D, when Pagpa, the Abbot of Sakya monastery, became a vassal of Kublai Khan, the first Emperor of the Yuan Dynasty. During this period a little is known in history except that Tibet became decentralized into a number of petty principalities.

3. The period of Sakya, Pagdu, and Karmapa's Rule

This period began with Sakya's rule over Tibet, followed first by Pagdu's rule in Lhaoka and then by Karmara's rule in the Tsang region (Shigatse). The sakya period was the time written Tibet officially became an inseparable part of China. This period lasted from 1260 A.D to 1642 A.D during which political powers centered in the three regions of Sakya, Pagdu, and tsang successively ruled over Tibet.

4. The period of the gandan Podrang's Administration

This period is the period in which the Dalai Lama ruled Tibet. It started in 1642 A.D. when the 5th Dalai Lama overtook the ruling power from the Tsang ruler. It basically ended in 1951 when Tibet was liberated and came to a complete end in 1959 when rebellion led by the Dalai Lama was pacified and the People's Government of the Tibet, Autonomous Region was set up. 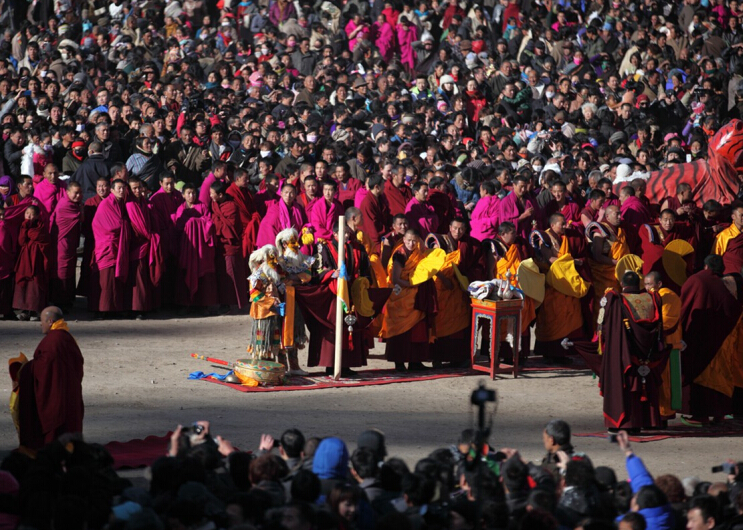 The Tibetans first settled along the middle reaches of the Yarlung Zangbo River in Tibet. Evidence of the new and old stone age culture was found in archaeological excavations at Nyalam, Nagqu, Nyingchi and Qamdo. According to ancient historical documents, members of the earliest clans formed tribes known as "Bos" in the Shannan area. In the 6th century, the chief of the Yarlung tribe in the area became leader of the local tribal alliance and declared himself the "Zambo" (king). This marked the beginning of Tibetan slavery society and its direct contacts with the Han people and other ethnic groups and tribes in northwest China.

At the beginning of the 7th century, King Songzan Gambo began to rule the whole of Tibet and made "Losha" (today's Lhasa) the capital. He designated official posts, defined military and administrative areas, created the Tibetan script, formulated laws and unified weights and measures, thus establishing the slavery kingdom known as "Bo," which was called "Tubo" in Chinese historical documents.

After the Tubo regime was established, the Tibetans increased their political, economic and cultural exchanges with the Han and other ethnic groups in China. The Kingdom of Tibet began to have frequent contacts with the Tang Dynasty (618-907) and the Tibetan and Han peoples got on well with each other. In 641, King Songzan Gambo married Princess Wen Cheng of the Tang Dynasty. In 710, King Chide Zuzain married another Tang princess, Jin Cheng. The two princesses brought with them the culture and advanced production techniques of Central China to Tibet. From that time on, emissaries traveled frequently between the Tang Dynasty and Tibet. The Tibetans sent students to Changan, capital of the Tang Dynasty, and invited Tang scholars and craftsmen to Tibet. These exchanges helped promote relations between the Tibetans and other ethnic groups in China and stimulated social development in Tibet.

From the 10th to 12th century, Tibet fell apart into several independent regimes and began to move towards serfdom. It was at this time that Buddhism was adapted to local circumstances by assimilating certain aspects of the indigenous religion, won increasing numbers of followers and gradually turned into Lamaism. Consisting of many different sects and spread across the land, Lamaism penetrated into all spheres of Tibetan life. The upper strata of the clergy often collaborated with the rich and powerful, giving rise to a feudal hierarchy combining religious and political power and controlled by the rising local forces.

The Yuan Dynasty (1279-1368) founded by the Mongols in the 13th century brought the divided Tibet under the unified rule of the central government. It set up an institution called Xuanzhengyuan (or political council) and put it in charge of the nation's Buddhist affairs and Tibet's military, governmental and religious affairs.

Phagsba, a Tibetan lama, was given the title of imperial tutor and appointed head of the council. The Yuan court also set up three government offices to govern the Tibetan areas in northwest and southwest China and Tibet itself. The central government set up 13 Wanhu offices (each governing 10,000 households) in Inner and Outer Tibet east of Ngari. It also sent officials to administer civil and military affairs, conduct census, set up courier stations and collect taxes and levies. Certificates for the ownership of manors were issued to the serf owners and documents given to local officials to define their authority. This marked the beginning of the central authorities' overall control of Tibet by appointing officials and instituting the administrative system there.

The ensuing Ming Dynasty (1368-1644) carried over the Tusi (headmen) system in the Tibetan areas in northwest and southwest China. In Tibet proper, three sect leaders and five secular princes were named. These measures ensured peace and stability in the Tibetan areas during the Yuan and Ming dynasties, and the feudal economy there developed and culture and art flourished. Tibet's contacts with other parts of the country became more frequent and extensive.

The Qing Dynasty (1644-1911), the last monarchy in China, set up a government department called Lifanyuan to administer affairs in Tibet and Mongolia. In Tibet, the Qing emperor conferred the titles of the "Dalai Lama" (1653) and "Bainqen Erdini" (1713) on two living Buddhas of the Gelugba sect of Lamaism. The Qing court began to appoint a high resident commissioner to help with local administration in 1728, and set up the Kasha as the local government in 1751. In 1793, the Qing army drove the Gurkhas invaders out of Tibet and formulated regulations concerning its administration.

In other areas inhabited by Tibetans in northwest and southwest China, the Qing court continued the Tusi (headmen) system established by the Yuan and Ming dynasties, and put them under the administration of the Xining Commissioner's office (established in 1725) and the Sichuan governor (later the Sichuan-Yunnan border affairs minister).

After the Republic of China was founded in 1911, the central government set up a special department to administer Mongolian and Tibetan affairs. In 1929, the Kuomintang government set up a commission for Mongolian and Tibetan affairs in Nanjing and established Qinghai Province. In 1939, Xikang Province was set up. The Tibetan areas in northwest and southwest China, except Tibet, were placed under the administration of Qinghai, Gansu, Sichuan, Xikang and Yunnan provinces respectively.

After the Chinese Communist Party was founded in 1921, its central committee clearly stated in its Agrarian Revolution Program that the feudal privileges of Tibetan princes and Lamas would be abolished. During its Long March northward to fight the Japanese invaders, the Chinese Worker and Peasant Red Army passed through Tibetan areas in Sichuan, Xikang, Yunnan, Gansu and Qinghai, where they mobilized the poor Tibetans to carry out land reform and establish democratic political power of the laboring people. Areas inhabited by Tibetans were liberated one after another after the founding of the People's Republic of China in 1949. Tibet proper was liberated peacefully in 1951.