Festivals are time for Tibetans to come out of their homes and interact with other people. It is also a time for them to celebrate their age old customs and traditions, to introduce the newer generation to their culture and pay respect to the Buddha and personalities associated with Tibetan Buddhism.

The Tibetan New Year is known as 'Losar', the most popular of all the festivals of the year, when even young Tibetans wear chuba and pay their first visit of the year to a temple with their family early in the morning. On New Year's Day, Tibetans are supposed to offer ornaments called 'Chemar' and chang beer to their households deity and to the water dragon who takes care of their water supply. Be careful as the chang served is strong enough to get drunk. After saying 'Tashi Delek' and exchanging greetings with neighbors, Tibetans do nothing but feast on the food and drink that they have painstakingly prepared. They visit each others feasts and have parties full of drinking and singing. The men don't miss an opportunity to enjoy gambling, with games of 'Sho' (dice), 'Pakchen' (mah-jong), etc. On New Year's Day everyone spends time with their family or neighbors and then start paying visits to their relatives on the second day. Children also have a good time New Year's gifts of candies, etc. On the 3rd day they replace the year old tar-choks and dar-shings on the roof of their houses with new ones and burn thick bunches of 'Sang' (fragrant grasses). After so much feasting it is no wonder that Tibetans take days off after the celebrations. Other nationalities such as the Han and Hui have their own New Year celebrations according to different calendars but the shopkeepers among them are said to be too scared to even open their shops during Tibetan Losar, due to the mobs of drunk Tibetans. 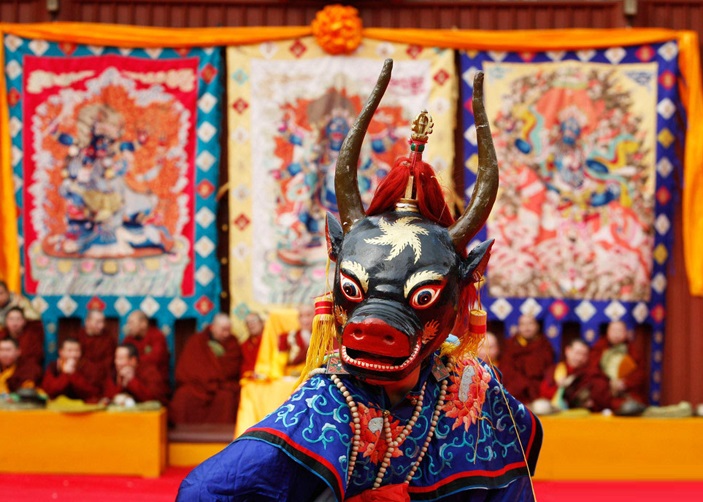 The Butter Lamp festival is the last day of the Great Prayer Festival and was first celebrated by an eminent patron of Tsohgkhapa, Lord of New Dzong in 1409. He lighted innumerable butter lamps to honour the victory of Buddha over non Buddhist opponents. In this festival, Tibetans assemble at the Barkhor Street in Lhasa and pray to Buddha during daytime. As the night falls, thousands of butter lamps are illuminated, songs are sung and dances performed throughout the night. 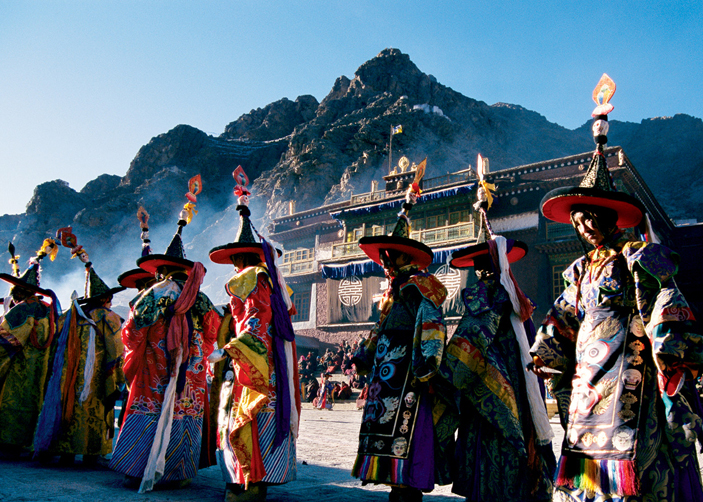 Saga Dawa Festival is celebrated in 15th day of the 4th Tibetan month. It marks the day when Buddha Shakyamuni was conceived in the womb of his mother, Queen Mayadevi, gained victory over demons (35 years later) and gained complete enlightenment under Bodhi Tree (early 16th century). It is also said that on this day half a century later, Buddha passed into parinirvana, the ultimate state of peace, at Kushinagara. Princess Wencheng, too, is supposed to have arrived in Lhasa post her marriage to Tibetan king Songtsen Gampo on this day.

On this festival, the government offices of Lhasa remain close. Sutras are recited and sacred chham dances performed in almost every monastery. Individually, people participate in circumambulation of Lhasa city and spend their afternoon on picnic at "Dzongyab Lukhang" park at the foot of Potala. Performance by folk artists that pay respect to Buddha are also organised. Lastly, since it is believed that good deeds performed in this month deserves 300 fold in return, many people generously dontae money, food and other items to monasteries and beggars. 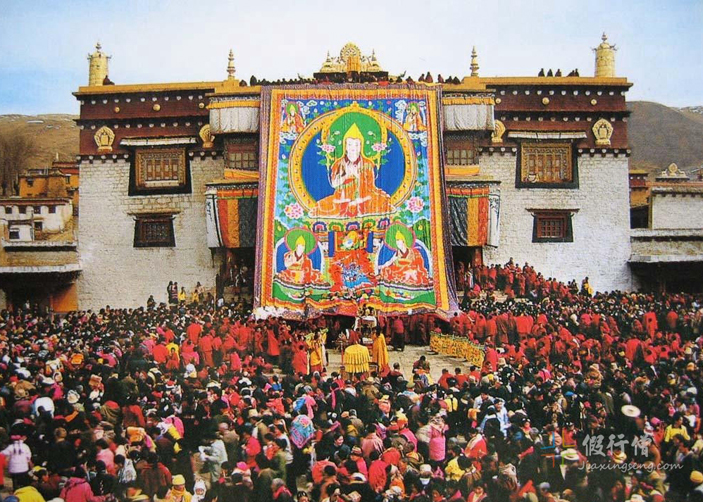 Date: 30th day of the 6th month of Tibetan calendar

One of the most important festivals in Tibet, Shoton means the Yoghurt festival. In earlier times, lamas locked themselves up in the monastery and pious people went into mountain hermitage perform penance. When they came out of their seclusion, local people served them yoghurt and danced to welcome them back. The opera performance, which is a major attraction today, was introduced for the first time in the 17th century. At that point of time, it was celebrated around monasteries and in Lhasa and Drepung Monastery, however the beginning of the 18th century saw the celebration shifting to Norbulingka. Popular fairs also form part of the festival. Because of the opera performance, the festival is also known by the name of Tibetan Opera Festival. In Drepung Monastery, a giant thangka of Buddha is unveiled during this festival which draws a whole lot of crowd. 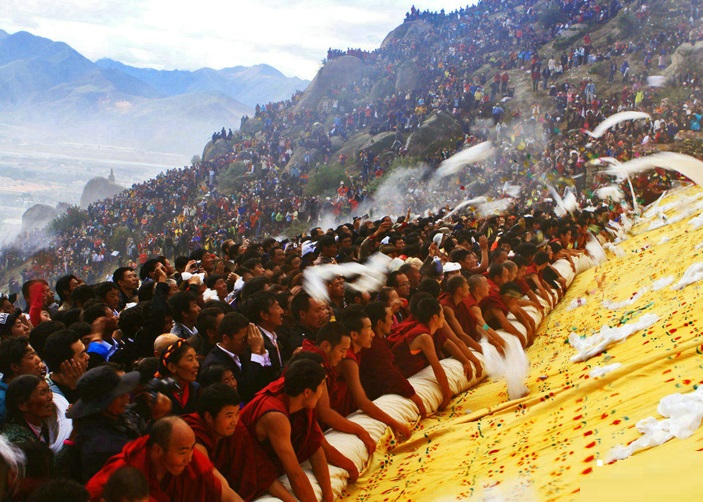 This festival is celebrated for a week, from 6th ro 12th day of the 7th lunar month. The bathing Festival has its origin in a legend as per which Avalokitesvara, one of the Buddhist deities, filled in the Tibetan rivers with holy water so as to eradicate a pesitilence. A suffering person was instantly cured the moment he took a bath in the holy water. The custome of bathing in the river water passed on from one generation to the other till the time it became a festival. Today, a whole lot of Tibetans take a dip into the river water believing that it will not only clean the body bur also cure away any disease. It is also believed that the sacred planet Venus appears in the sky during this time and fills the river water with curative powers. 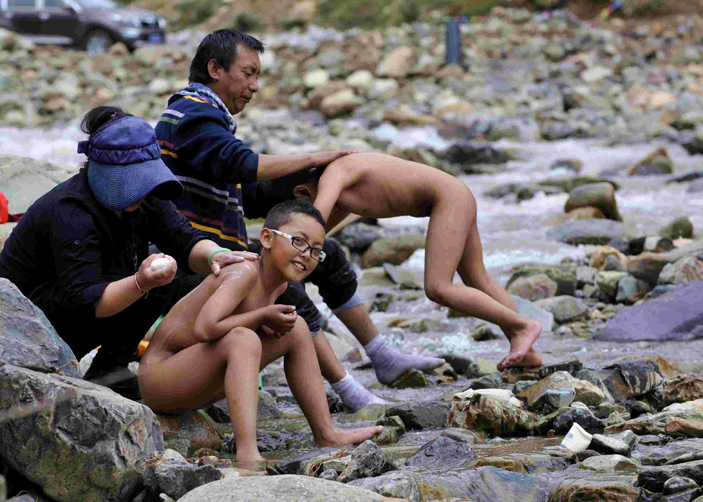 Horse Racing and Archery Fairs are unique events held in the plains of Tibet. They are held between June and July, according to the Tibetan calendar, when the pastures are lush and the horses and cows are stout and strong. While horse racing occurs each year, large events occur only once every three years. Events last several days, with the longest ones lasting ten days or more. The most well known events are the Kyagqen Horse Racing Art Festival of Nagqu and the Darma Festival of Gyangze. 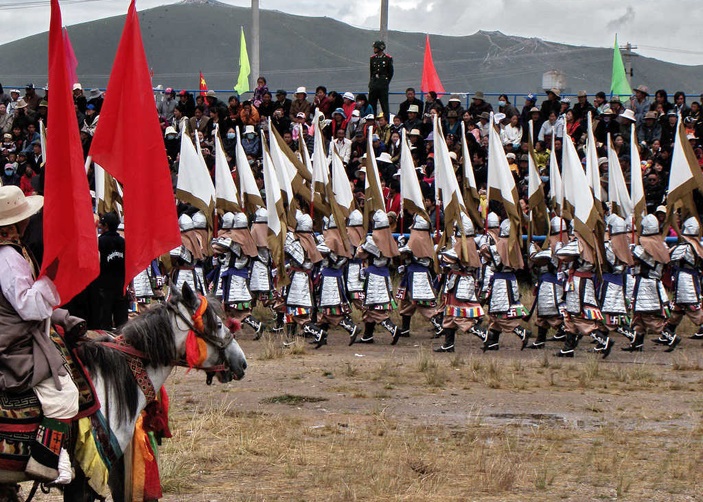