Over the centuries, Tibetan culture and arts were developed under both internal and external factors, cultural influence of the neighboring countries also have influenced the development of Tibetan culture, including Nepal, India and Bhutan in the south and west, China and Mongol in the north and east. Here let us unveil the mystery of Tibetan culture for you.

Tibetan is spoken in Tibet, Bhutan, Nepal, and in parts of northern India (including Sikkim). It is classified by linguists as a member of the Tibeto-Burman subgroup of the Sino-Tibetan languages.  Tibetan is written in a very conservative syllabary script based on the writing system of the ancient Sanskrit language of India. Used in its present form since the 9th century, it was developed as a means of translating sacred Buddhist texts that were being brought into Tibet from India. The writing system derived from the pronunciation of the language as it was in about the 7th century, and varies in many ways from colloquial Tibetan as it spoken today. 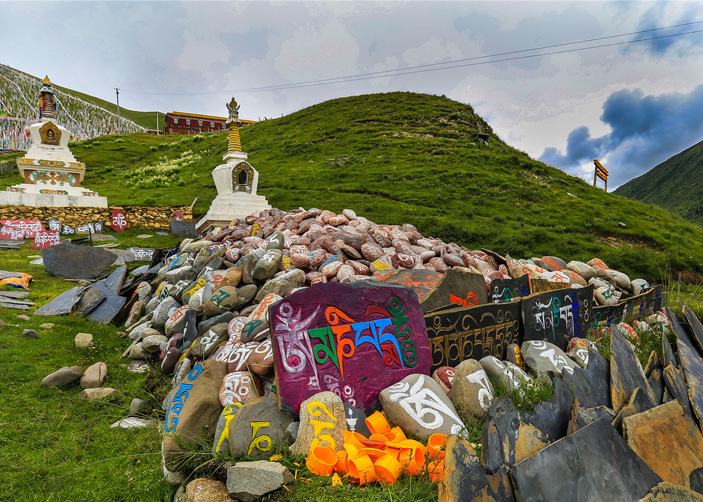 Tibet Architectures can be found everywhere in Tibet area, the main forms are:  monastery, palace, tomb & folk house. Architecture in Tibet contains Chinese and Indian influences but has many unique features brought about by its adaptation to the cold, generally arid, high-altitude climate of the Tibetan plateau. Buildings are generally made from locally available construction materials, and are often embellished with symbols of Tibetan Buddhism. For example, private homes often have Buddhist prayer flags flying from the rooftop. 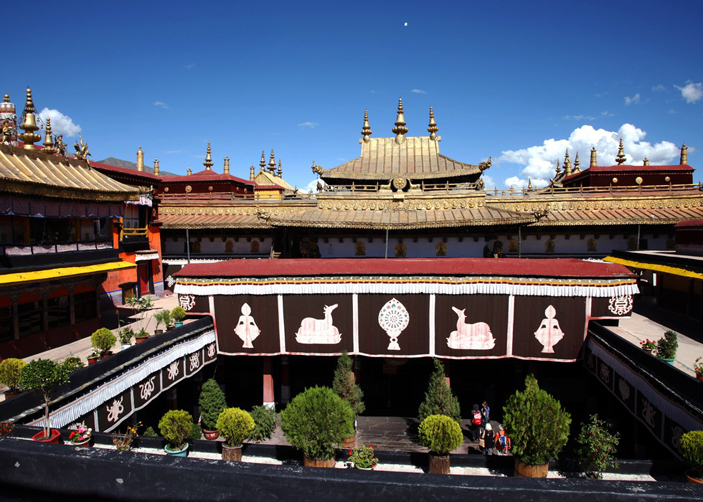 Tibetan painting, greatly influenced by Buddhist paintings, is one of the most popular Tibetan arts.  It has absorbed the essence of Chinese, Indian and Nepalese pictorial arts but still keeps its own features. The most distinctive form of the Tibetan painting is  Thangka painting, rock painting, fresco painting, and engraving painting. 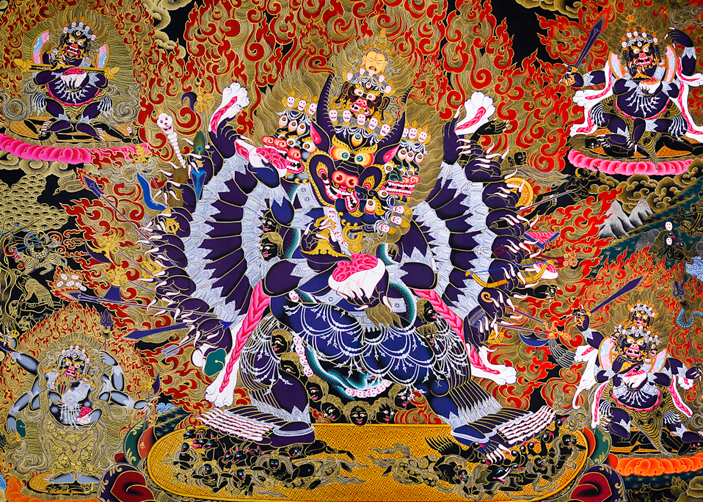 Metal, clay, stucco, wood, stone, and butter are all used in the creation of sculptural images, yet by far the best known of these is metal, since small, portable. The metal used is mainly bronze, occasionally with silver or gold. Further more, butter sculpture is also a famous art form of Tibetan sculptures. 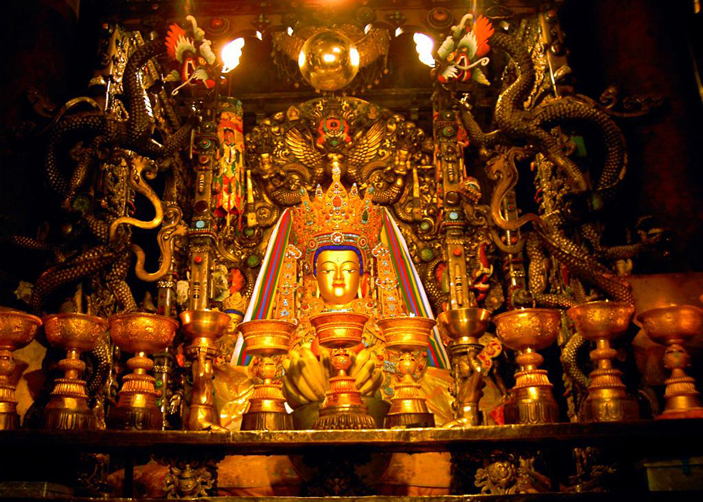 Tibet is also known as “Ocean of songs and dances”, Almost every Tibetan can sing and dance. Dancing and singing have mixed with locals lives since centuries ago, The music of Tibet reflects the cultural heritage of the trans-Himalayan region,  songs are widely categorized as wedding songs, love songs, archery songs, circular dancing songs, folk songs, drinking songs, labor songs as so on, they are deeply connected with their daily life. Tibetans will sing anytime, for any event. And they will dance at festivals, weddings, gatherings and even during their leisure time. The most famous dance in Tibet are: Wild Bull Dance, Yak Dance, Deer Dance, Crane Dance, Peacock Dance, Sorcerers’ Dance, Drum Dance and other kinds of folk dances. 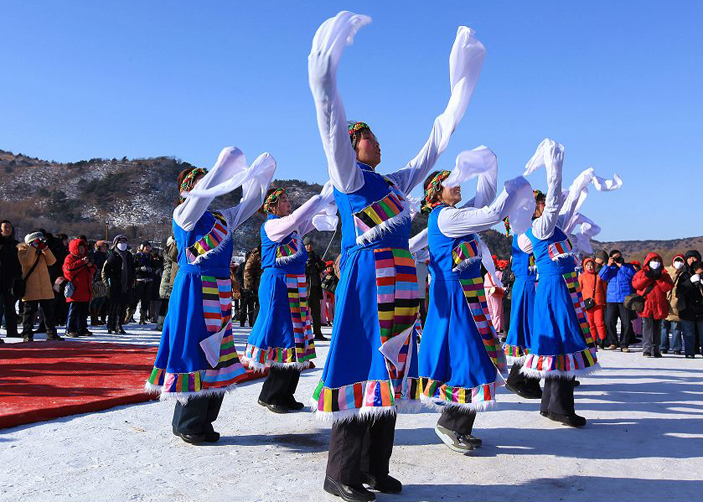 Tibetan opera, Ace Lhamo or Lhamo, which means Fairy in Tibetan, is the traditional opera of Tibet. Buddhist teachings and Tibetan history are the sources of Tibetan Opera's inspiration, so most of its repertoire is based on Buddhist stories and Tibetan history. The traditional drama is a combination of dances, chants, songs, and masks. The highlight of Lhamo is its mask. Usually on the forehead of the mask there is a motif of the Sun and Moon. From the mask, the role of the player can be identified. A red mask refers to the King; a green the queen; a yellow lamas and deities, etc. A Tibetan opera performance follows fixed procedures. Each performance begins with the purification of the stage and a blessing to the God. A narrator sings a summary of the story in verse. Then performers enter and start dancing and singing. The performance ends with a ritual of blessing. 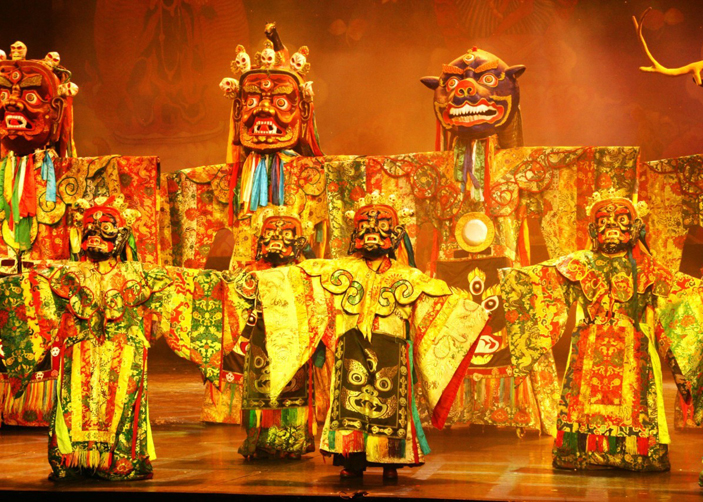