Tibet's culture is unique in the world. Due to its extreme environment and high altitudes it has formed its own unique customs over thousands of years. It is one of the aspects of Tibet that most visitors will find most intriguing. Tibetan's hospitality is legendary and many Tibetans find it a great honor to welcome guests into their homes and treat them to a wonderful evening of food, wine, and dancing. Tibet's distinctive communal cultures such as etiquette, dress, marriage and burial ceremonies are colorful, unique, and unforgettable. 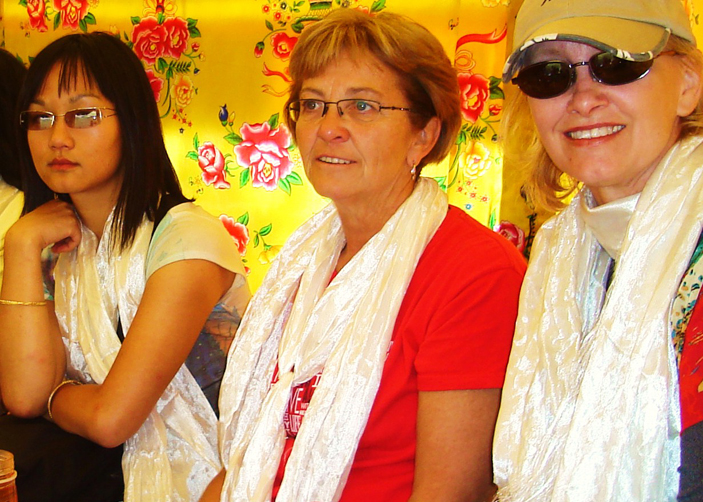 Presenting a Hada (a white woven scarf which symbolizes purity and loyalty) is a traditional practice in Tibet to show respect and hospitality. Hadas are also presented by Tibetans when they visit parents, worship the Buddha, see somebody off, and welcome someone home. For the one who is presenting Hada, he /she should raise the Hada above his/her shoulder and bow. The person receiving the Hada is required to accept with his two hands. When Tibetans greet each other, they use long words. They would add 'la' after the name to show their respect. While everybody is being greeted, the listener must listen carefully without any impatience. They always express certain verbosity in saying good bye. In particular, if the host is elderly, they are repeatedly given expressions of good wishes, auspiciousness, safety, and good fortune. 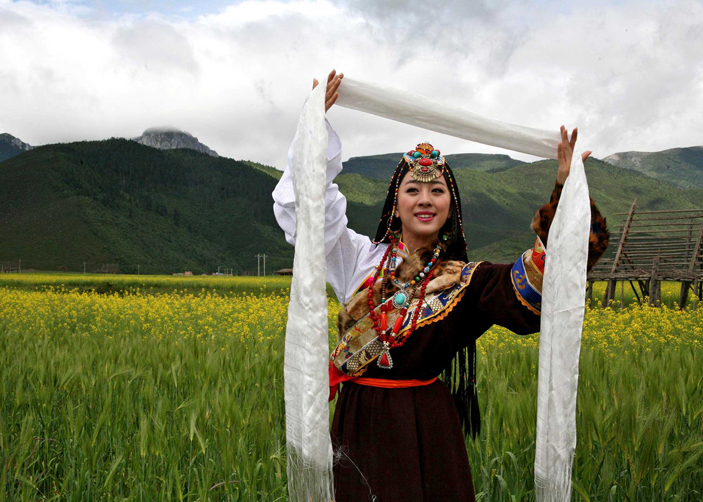 When Tibetan people present you a cup of wine, you should dip your ring finger in the wine and flick the wine to the sky, in the air and to the ground respectively to express your respects to the heaven, the earth and the ancestors before sipping the wine. Then the host will fill the cup, and you take a sip of the wine again. After the host fills your cup three times, you will take the whole cup of the wine. 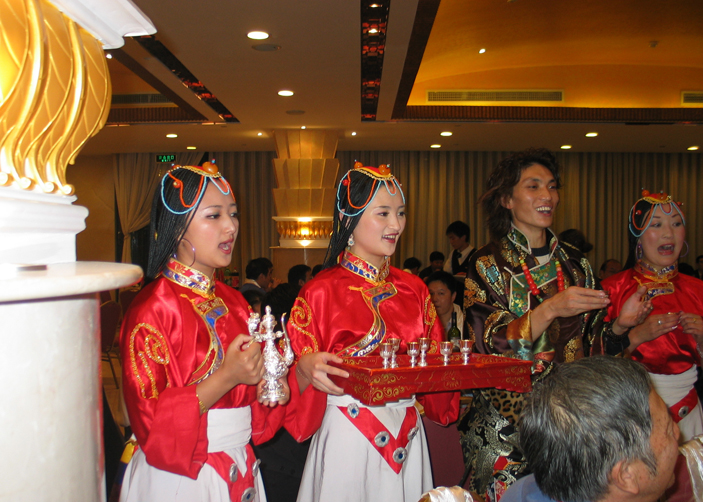 The main food and meat in Tibet are highland barley, beef and mutton. Tibetan people never eat horse meat, dog meat and donkey meat. In some areas in Tibet, people do not eat fish, either.

Smoking in Tibetan Buddhism monasteries is strictly banned. It is not allowed to touch the statues of Buddha and religious articles or take pictures of them. In addition, everybody should walk clockwise around monasteries or other religious objects like pagodas, Mani-stone piles, incense-burners, etc.

Tibetan folk songs and dances are an indispensable part of every Tibetans' life, especially during festivals or important events. Being named as the "Ocean of Songs and Dance", Tibet has several unique forms of singing and dancing: Guoxie (circle dance), is an informal dance popular in countryside of Tibet; Duixie (tap dance), is usually accompanied by stringed instruments; and Zhuoxie (drum dance) that is popular mainly in Lhoka, Lhasa and Xigaze. Their melodious love songs, with bursts of hearty laughter, keep reverberating over the grassland. Tibet also has the Ghost Dance, Mask Dance and Guozhuang Dance, each of which represents Tibetan local customs.

Over thousands of years, the Tibetan people have created their own unique style of clothing that is adapted to the land, weather and way of life, as well as the history, culture, beliefs and character of the local people. Each area of Tibet has its own distinct style of clothing. Tibetan clothing consists of a robe and shirt. The Tibetan robe worn by men is broad and is normally fastened under the right arm, while the women's are slightly narrower with or without sleeves. Men typically wear white shirts with high collars, while women wear various colors with turndown collars. The wearing of aprons is very popular among Tibetan women, as it is considered to be a privileged dressing style specially reserved for the married women. 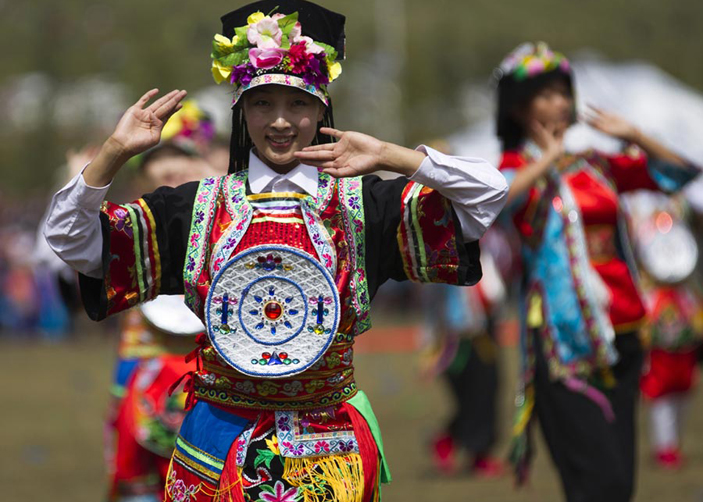 Rite of Passage for Tibetan Girls

In some areas of Tibet, when a daughter reaches the age of 16, a coming of age ceremony/party is held on the second day of the Tibetan New Year. On this day, parents prepare beautiful clothes and various ornaments for their newly grown-up girl. After the rite of passage, there are some noticeable changes about the young woman. Her hairstyle, clothing, ornaments, and name will be changed to show her newly acquired womanhood. Braiding their hair into more than ten braids, girls are particularly subject to customs relating to headgear which is called "heavenly head" ("wearing the head of the sky"). It is an initiation rite practiced in all Tibetan-inhabited areas, but its meaning varies from place to place. It is as grand as a marriage ceremony and its purpose is to show that the girl is grown up and is available for marriage. 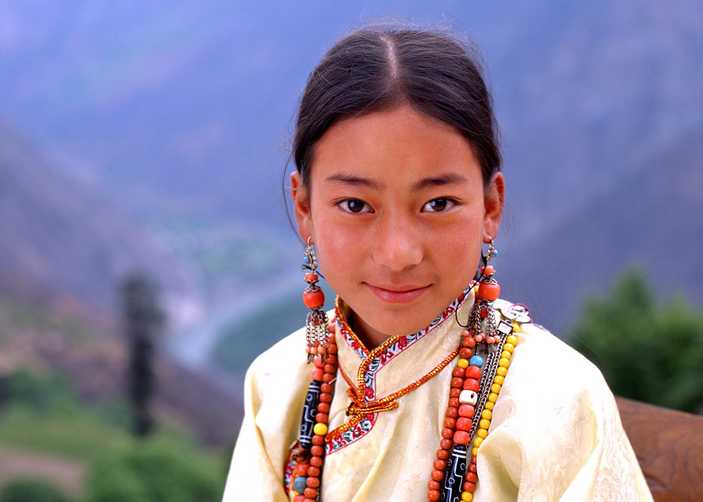 After the Tibetan girl's rite of passage, she is eligible for marriage. One of the most important and interesting parts of a Tibetan's life is the wedding ceremony. During the wedding ceremony, the bride and groom will kneel down in front of the groom's parents and a photo of the Buddha while monks chant. The bride will then take her ring finger and flick milk tea three times to salute heaven, earth, and the Buddha. The wedding feast will then begin. Sometimes the groom and the bride are nearly buried beneath the large number of Hadas draped across their necks. When the ceremony is over, a party is held, at which everyone sings and dances till dawn. The wedding ceremony can be as short as one day, but frequently can be as long as ten. During the celebrations, the host will prepare sumptuous food, tea and wine for the guests, who will enjoy themselves to their hearts content. 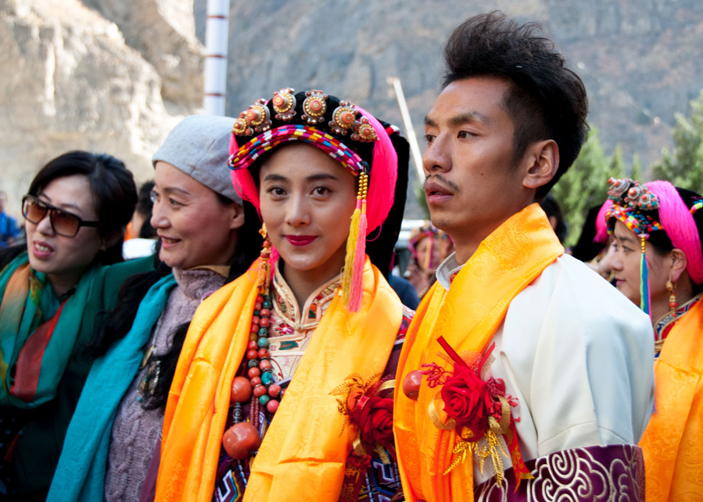 Eagles are sacred birds in the mind of Tibetan people. And also the sheep or cows with red color or colored strips on their body are considered as sacred animals. It is forbidden to disturb them or do harm on them.

The Tibetan custom of sky burial in which corpses are dismembered and fed to vultures has attracted mixed feelings of revulsion, fear and awe among outside visitors. Yet it is important that the custom is no the only means of disposing of the dead in Tibet, but it is the most popular throughout the Tibet. Since Tibetan are strongly practicing Buddhism and believing death and rebirth from their own Buddhist teachings. Following the moment of the death, the consciousness or spirit will leave from the deceased body and the body is thought to return to one of the elements- earth, air, fire, water or wood. Through there are also other means of burial practicing in Tibet, but it is only subjected to some limited conditions. Cremation is mostly use for high lamas and the ashes placed in a stupa as funeral tombs. Earth burial is also rare and those who are dead by poison or communicable diseases will buried. Water burial-where the deceased body fed to fishes, it is mostly reserved for small children. After several days of ritual officiation by monks will help the consciousness to transfer from the deceased body and then guide it to the next life. Then the corpse brings to the sky burial site. There are several holy sky burial sites around Tibetan plateau including Sera Shar and Dregong Thill in central Tibet; and Darling monastery in Golok. Corpses may be carried long distances fro dismemberment at one of the preferred sites. There specialized monks or lay people at the burial site works at the sky burial site, the corpses cut into shreds and feed to vultures, bones also crushed and mixed with Tsampa and feed at the end. The vultures mostly staying nestling near by mountain of the sky burial site and are summoned by an offering of incense. They are revered as birds of purity, subsisting only on corpses. Tibetans are not only people to dispatch the dead in this way. The Parsees in India follow a similar custom. However the ancient Parsee religious custom may soon disappear because the vultures that eat the bodies are headed for extinction in India. Populations of both the long-billed and white-backed vulture have crashed since 1996 due to a virus of some kind. 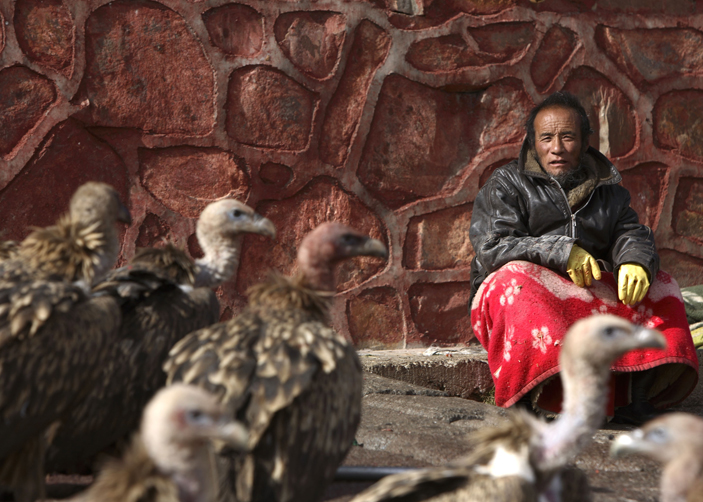