Location and Status of Gyangtse

Gyantse town is strategically located in the Nyang Chu, connecting Kathmandu to Lhasa. Lying on a historic trade route between India and Tibet, Gyantse has long been a crucial link for traders and pilgrims journeying across the Himalayan plateau. And as part of an itinerary running between Lhasa and Mount Everest, it's a great place to stop off for at least a day.

Once the third largest Tibetan city after Lhasa and Shigatse, Gyantse today is home to only 8,000 or so residents, offering basic accommodations and dining options. Gyantse's Old Town clusters in the space between Pelkor to the north and the Dzong to the south, while the newer largely Han Chinese district lies to the south of the Dzong on its rocky promontory. If you stay overnight in Gyantse, you'll almost certainly stay in the new district where all of the hotels and and restauarants catering to tourists are to be found. 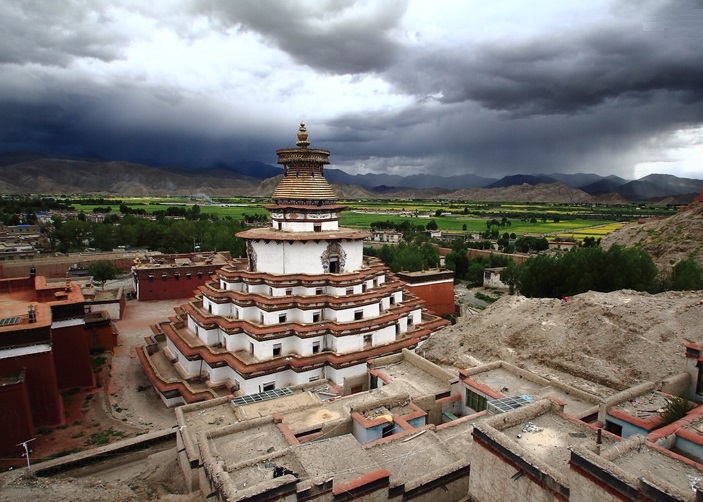 Gyantse has played a key role in several phases of Tibet's complex history, both in its modern and medieval epochs. It was once considered the 3rd largest city of Tibet, after only Lhasa and Shigatse, but in recent decades the fast-growing Chinese-dominated towns like Bāyī and Tsetang has replaceed Gyantse. This might be a good thing, as Gyantse is able to keep its small-town charm and laid-back atmosphere.

Gyantse is often referred to as the "Hero City" because during the British Younghusband expedition of 1904, the 500 soldiers of the Gyantse dzong held the fort against the British forces until jumping from the cliff.

What to see in Gyangtse

The first of Gyantse's famed pair of attractions is the 14th century Gyantse Dzong (Gyantse Fortress). It was there in 1904 that Tibetan forces mounted stiff resistance against the British Expeditionary Force led by Francis Younghusband, only to lose out to superior firepower. The British marched on to Lhasa, where they extracted onerous concessions from a Tibetan government in shambles—the 13th Dalai Lama had fled, the Tibetans were ignoring the dictates of the Qing Dynasty Chinese advisor known as the amban, and Tibet's tenuous isolation from Great Power geopolitical maneuvering was no more.

Gyantse Kumbum and the surrounding Pelkor Chöde Monestary complex comprise Gyantse's other major attraction. The largest chörten (stupa) in Tibet, the 15th century structure takes the the form of a massive three-dimensional Buddhist mandala. Today, the Kumbum is at the heart of a monastic community numbering about 80, a far cry from the thousand-plus monks who resided on the site in its heyda. And though a number of the statues and murals housed in the Kumbum's 77 chapels are post-Cultural Revolution replicas, it remains one of Tibet's finest examples of Tibetan Buddhist architecture.

Aside from Gyantse Dzong and Pelkor Chöde (including the Guru Lhakhang chapel), Gyantse attractions worth visiting include the Rabse Nunnery, located on the other side of the hill rising between Palkor and the Dzong, the Tsechen Monastery ruins, and the more disant Tsi Nesar Monestary, some 25 kilometers outside of town.

If you happen to be in Tibet 20–23 June, you can catch Gyantse's three-day Dhama Festival, featuring 19 local villages trying to outdo each other in horse races, yak races, wrestling and traditional dances. Accommodation is tight in Gyantse during the festival but you could easily commute from Shigatse, 90 minutes away 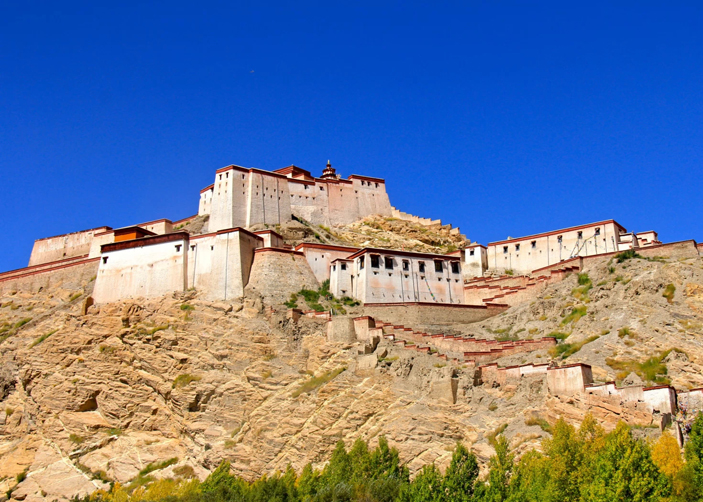 Food and Restaurant of Gyangtse

As with accommodations, many visitors sign on to a Tibet tour package that takes in Gyantse, simplifying the matter of dining greatly. However, indepenent travelers will find a number of local options, both in the old Tibetan town in the north of Gyantse (family dining and street food) as well as in the modern southern quarter, with its mix of Tibetan, Nepali, Chinese Muslim and Han Chinese restaurants.

Get to Gyantse & Get around Gyantse

Buses from Lhasa depart in the morning and stop in the late afternoon in Gyantse as well. All of Gyantse’s sights can be enjoyed fully on foot, but there are rickshaws and even taxis if you need them.

The road west from Lhasa divides at the Chusul Bridge and most vehicles follow the paved Friendship Highway along the course of the Yarlung Tsangpo to Shigatse. However, there is an alternative route, the longer but extremely picturesque old southern road that heads southwest to the shores of Yamdrok Tso, before turning west to Gyantse and then northwest to Shigatse.

Because of its elevation, Gyantse's climate is extreme; even in summer (May to September), at night or in shadow it can be very cold, and the sun is intense. Winters (November to March) are severe - January averages minus 2ºC - but largely dry and snow-free. Eastern Tibet has a monsoon season from around July to October, with high rainfall. Spring and autumn weather varies wildly, often during a single day, so be prepared.

Thus, April to October are the best months for you to visit Gyantse. Winters are cold but exceptionally dry. Saying that, there are less tourists in the winter months which can make the experience more authentic.