Inquire
OVERVIEW
This tour combine the spectacular natural sights in Guilin & Yangshuo with the classic attractions of the modern metropolis Hong Kong & Shanghai. Go for it, you'll feel like bathing in deep river of history, culture & folklore. 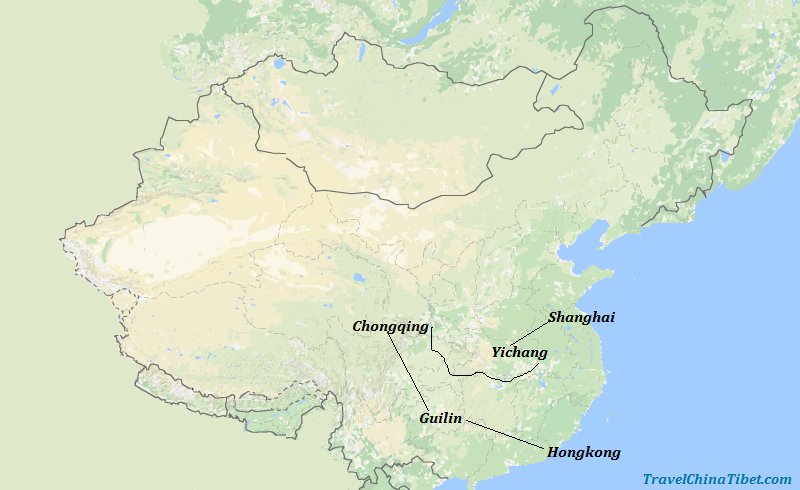 Accommodations: Overnight in HK and hotel arranged by you
Day 3Hongkong - Guilin
Transfer Via: Flight arranged by us

Highlights: Today you will arrange your own trasnfer to HK airport for the flight to Guilin. Upon your arrival in Guilin, the most scenic city in China, your personal guide will meet you and escort you to your hotel. The rest of the day is yours to relax. Evening if time permits, you can walk leisurely around the famous city water system--Two Rivers and Four Lakes for amazing night views.

Two Rivers and Four Lakes: Which is refers to the water system consisted of Li River, Peach Blossom River, Wooden Dragon Lake, Othmanthus Tree Lake, Banyan Tree Lake and Fir Tree Lake that surrounding the downtown Guilin. A walking tour or a boat tour through the area is definitely a highlight, it is extremely beautiful with evening lights.

Highlights: After breakfast, you will be driven to Zhujiang Pier (40-minute drive) to start your boat cruise down the picturesque Li River. After checking into your hotel, the rest of today you will cycle to Yangshuo's beautiful countryside, cycling along the famous Yulong River is a fatastic experience to enjoy the countryside views. You will also pay a short visit to a local farmer's house to learn their daily life.

Li River Cruise: As one of the most famous river cruise in China, the Li River has attracted millions of visitors and celebrities from all parts of the world. During the 4 hours cruise, you will be inspired by breathtaking views of peaks and pinnacles, crystal-clear water and picturesque pastoral views of rice paddies, bamboo trees and water buffaloes. Visitors feel they have stepped into a traditional Chinese painting

Recommended paid add-on show: “Impression Third Sister Liu>”, Price: RMB268=USD45/per person for basic seat. (we do not include it because the availability is subject to the weather.)

Elephant Hill: Which is situated at the junction of the Li River and Taohuajiang Rivers. Rising 55 meters above the water, the hill is a spectacular limestone karst formation with a naturally-shaped cave at the bottom. Look from distance, the hill is like a huge elephant drinking water from the river. As a symbol of Guilin, it is definitely a must see when visiting Guilin.

Reed Flute Cave: known as "the Palace of Natural Arts ” , Reed flute cave is located 5km away from downtown Guilin, and considered as one of the most extraordinary scenic spots in China. As "must-see" sights in Guilin, the cave is 240m long and 19 degrees centigrade all the year round. It is a magic fairyland of stalactites, stalagmites, stone pillars, stone curtains, etc. The cave is now equipped with artificial lighting system to emphasize visual effect.

Highlights: Today will be free until your guide picks you up to the airport and flight to Chongqing. Welcome to Chongqing! Upon arrival, be met by our tour guide and escorted to visit Ciqikou Old Town, Three Gorges Museum. Then board your lifetime Yangtze cruise around 20:00-20:30.

Ciqikou Old Town: Perched on a hill overlooking the Jialing River in the west of the city, Ciqikou Old Town, which means Porcelain Village in Chinese, dates back to the late Ming Dynasty (1368-1644). You will see lots of Ming and Qing Dynasty architecture, local shops, tea houses, local Sichuan street performance and more.

Three Gorges Museum: Opened in 2005. Chongqing Three Gorges Museum is the largest monographic museum in China occupies 40,000 square meters. The exterior of the museum has cambered walls and vitreous dome, representing the history & culture of Three Gorges Project and its origins. It is near People’s Square and the Great Hall of the People. It is also called the Chongqing Museum.

Highlights: Today is the shore excursion to visit Fengdu Ghost City. This ancient complex is full of shrines to the gods of the underworld. Surrounded by misty mountains, this area was revered as a crossing-over point, a mix of the material and spiritual worlds. On this day, you will also enjoy Captain’s Farewell Party, Chinese Folk Dance and other cultural activities onboard.

Note: Some cruise ships make the shore excursions to Shibaozhai Pagoda, a Pearl on Yangtze River. The 12-storey, 100-foot high red pagoda stands in front of a mountainous area full of shrubs and trees. It needs some walk to climb up the pagoda stairs to experience the spectacular scenery from above. (Note: Wear comfortable shoes when visit Shibaozhai ashore.)

Highlights: Today you will take smaller vessel to visit Shennv Stream. Shennv Stream, also called Goddess Stream, is an original virgin valley of Yangtze River where you could not only see the beautiful and legendary gorges, hanging coffins, but also enjoy local sampan trip and Tujia minority culture.

Note: Some ships go to the Shennong Stream where you could not only see the beautiful and legendary gorges, hanging coffins, but also enjoy local sampan trip and Tujia minority culture. You have the final say on which excursion to make, as we can book any of the cruise ships at great rates!

Accommodations: Stay overnight on the ship
Day 9Yichang - Shanghai (B)
Transfer Via: Flight arranged by us

Highlights: Today you will have a shore excursion to visit the well-known Three Gorges Dam. As the biggest hydropower project in the world, the dam provides tremendous power generation and flood control service. Visit the Tanziling Park, Gorges Exhibition and have close look at the dam to know better of the largest construction projects.  The ship will keep sailing to Yichang Pier for disembarkation; you will arrive in Yichang around 13:00-13:30. Then be met by our guide and escorted to airport for the flight to Shanghai. Welcome to Shanghai, the most metropolis of China! Upon arrival, you’ll be met by our guide and escorted to your hotel. The rest of today is at your leisure.

Highlights: After breakfast, you'll visit the Shanghai Urban Planning Exhibition Center, a must-see for all true Shanghainophiles to witness how Shanghai became a cosmopolitan city from a shabby fishing village. Continued is a tour to the beautiful Yu Garden, a pleasant enough,well-contained classical Chinese garden, and savor some local flavor snacks at the Yu Garden Bazaar.Continued you will pay a visit to a Silk Factory to learn the Chinese silk culture. Then ascend the Jinmao Tower to get an amazing bird's eye view of this metropolis.

Shanghai Urban Planning and Exhibition Center: If you want to see what a city of the future is really going to look like, come and visit Shanghai Urban Planning Exhibition Center on the eastern end of People's Square. Housed in a striking modern five-story building made of microlite glass, this is one of the world's largest showcases of urban development and is much more interesting than its dry name suggests. The highlight is on the third floor: an awesome vast scale model of urban Shanghai as it will look in a couple of decades, a master plan full of endless skyscrapers punctuated occasionally by patches of green. The clear plastic models indicate structures yet to be built, and there are many of them.

Yu Garden: Yuyuan Garden (Happy Garden) is one of the highlights of Shanghai. It isbelieved to have been built in the Ming Dynasty, more than 400 years ago, with an exquisite layout and beautiful scenery. The inner and outer gardens were both built in the Ming Dynasty classical style, with numerous rock and tree garden areas, ponds, dragon-lined walls and zigzagging bridges separating various garden areas and pavilions. It is in the center of Shanghai's Old City, a few blocks south of the Bund. The surrounding bazaar area has good shopping opportunities for traditional Chinese products, gold, and jewels.

Jinmao Tower: The Jin Mao Building symbolizes Shanghai emerging into the 21st century. It was the tallest building in the country and third tallest in the world until 2007, when the World Financial Center was finished, In 2014 the Shanghai Tower will become China's tallest building. With an east-meets-west design signifying Shanghai's emergence as a modern global city, Jin Mao follows a multi-use model, offering retail shopping at its base, offices above, and the Grand Hyatt  occupying the upper 38 floors.

Accommodations: Overnight in Shanghai
Day 11Shanghai Departure (B)
Transfer Via: Flight arranged by you

Highlights: After breakfast, head to the famous Bund to witness Shanghai’s skyline, and stroll along China's No.1 shopping street, Nanjing Road. Then be escorted to the airport for the flight home.

The Bund: Which is a 1.5 km waterfront area of in Huangpu District of downtown Shanghai. The Bund usually refers to the buildings and wharves on this section of the road, as well as some adjacent areas. It is one of the most famous tourist destinations in Shanghai, on the east of this area, you can see the mother river of Shanghai----Huangpu River; and on the west of it, you will see rows of western architectures from 1930s. Building heights are restricted in this area.

Nanjing Road: Starts at the Bund in the east and ends in the west, Nanjing Road is 3.4 miles and regarded as China's premier shopping street, it is a must-see metropolitan destination for shoppers from all over the world. Buildings with distinctive features erect on both sides of the street, huge signboards and advertisements show prosperity, and when the night falls, dazzling neon lights flicker with bright colors.