Inquire
OVERVIEW
Take advantage of the convenient international arrival at HongKong, then extend your vacation to discover the ancient capitals--Xian and Beijing, to discover the profound culture and history of China. 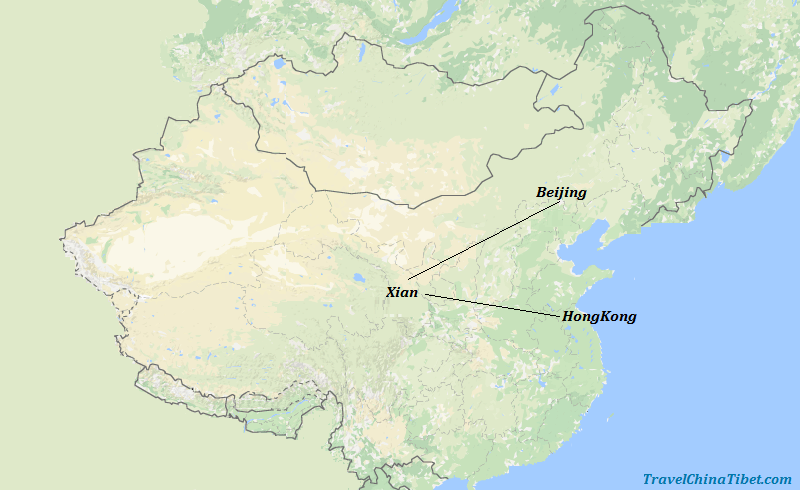 Accommodations: Overnight in HK and hotel arranged by you
Day 3Hongkong - Xian
Transfer Via: Flight arranged by us

Highlights: Today you will arrange your own trasnfer to HK airport for the flight to Xian. Upon your arrival in Xian, your personal guide will meet you and escort you to your hotel. The rest of the day is yours to relax.

Highlights: This morning you will visit the incredible life-size Terracotta Warriors ---a lifetime view of the extraordinary 2200-year-old terra-cotta Army of China' First Emperor-Qin Shihuang., and then pay a visit to the Ceramics Factory to learn the Chinese ceramics culture. Afterwards you will visit the Ancient City Walls--a symbol of great significance of the famous historic cultural city of Xian, you might have a biking tour on the wall by paying addtional RMB45=USD7/per person, it could be very special experience.

Terra Cotta Army: As the most important site in Xian and China, the Terra Cotta Warriors and Horses are the most significant archeological excavations of the 20th century. It took 11 years to finish, a group of peasants uncovered some pottery while digging for a well nearby the royal tomb in 1974. It caught the attention of archeologists immediately. The museum covers an area of 16,300 square meters, divided into three sections: No. 1 Pit, No. 2 Pit, and No. 3 Pit respectively. They were tagged in the order of their discoveries.

Ancient City Walls: As the first landmark you will encounter in Xi'an, the ancient city wall stretches round the old city. Xi'an was originally a walled city, and even today the wall is considered a landmark dividing the city into the inner part and the outer part. The wall is massive - tall, long and thick. The South Gate and North Gate are the two main entrances to the inner city. Having a biking tour on the wall is special experience you should not miss.

Highlights: Today you will visit The Shanxi Provincial Museum---a large modern museum of the national level. Then move to visit the Muslim community before your guide escorts you to the airport for your flight to Beijing. Upon your arrival, your personal guide will meet you and escort you to your hotel.

Shaanxi Provincial Museum: As the largest comprehensive museum in Shanxi province, the museum was built at the site of a former Confucian temple in the southern of Xian, it occupies an area of 70,000 square meters, and exhibits historical relics and stone carvings of ancient China. If you are history lovers, Shaanxi Provincial Museum is a must on your Xian trip

Muslim Quarter: Xi'an, was the capital in Tang Dynasty (618–907), Muslim merchants followed the silk road and settled down to start their business there, and their traditions and belief have been well preserved. Muslim quarter is the community of the Muslims, and a fascinating area where you can find exotic food, interesting people and great souvenir stalls.

Forbidden City: As the seat of Imperial power, the Forbidden City was built between 1406 and 1420 by the 3rd Emperor of Ming Dynasty, it is also known as the Imperial Palace Museum. Being ruined and renovated for many time, what you can see today is the buildings date from the 1700’s and onwards. The complex is totally 183 acres, there are total 9999.5 rooms in the Museum, some of them are not open for visitors yet.

Summer Palace: As the largest and best preserved imperial garden, the Summer Palace is also known as the Royal Garden Museum. It was used by royal family for 800 years, in 19th century, the famous Empress Dowager Cixi ordered massive renovations and restore by using the funds of Chinese navy. The garden is totally 293 hectares, of which the water takes 220 hectares, the highlights are Longevity Hill and Kunming Lake.

Kungfu Show: Which a great show telling a story of Chin Yu entering the monastery and making his way through life to finally becoming the Abbott. The show are with many demonstrations of Kungfu and various costumes. The show lasts about 1 hour and 15 minutes, visitors are not allowed to take photos or videos, but DVD of the show are available to be purchased.

Highlights: This morning tour will take you to size up the world-famous Great Wall (Mutianyu section which is less crowded, round-way cable car fee is INCLUDED), the key symbol of China. Flexible visiting time allows you to enjoy a lifetime trekking trip (1-2 hours' hiking). On the way to the Great Wall, you may have a distant view of the Olympic sites--Brid's Nest and Water Cube. Afterwards is a visit to the Changling Tomb and Sacred Road. In the evening, try the flavorful dish of Peking Roast Duck Dinner.

Great Wall of Mutianyu section: In the northern part of Huairou County some 70 kilometers north-east of Beijing City, the Mutianyu (Mu Tian Yu) section of the Great Wall stretches its way for over 2 kilometers. This section is well preserved and is a good alternative for visitors who would like to avoid crowds along the highly popular Badaling (Ba Da Ling) section during holiday and peak seasons.

Bird's Nest:  Which is also known as the National Stadium, due to its iconic design was the key competition venue of the Beijing 2008 Olympic Games and the 13th Paralympic Games. The opening and closing ceremonies of the two Games have taken place here, together with the football, and track and field competitions. The stadium is the world's largest steel structure

Water Cube: which is also called the National Aquatics Centre, is one of the dramatic and amazing venues to host Beijing Olympics in 2008. This is the first building of its kind in China and it is also an economical and water-saving creation. The structural design is based on the natural formation of soap bubbles which give a random, organic appearance and helping to link the structure to its aquatic function.The swimming pool is deeper than most Olympic swimming pools, allowing swimming at faster speeds, while the gutters to the side of the pool disperse wave energy.  A consequence of this was the breaking of 25 world records during the 2008 Olympics.

Sacred Road: Affiliated with the Ming Tombs, the Sacred Road was originally built to lead to the Changling mausoleum. It was considered to be the road leading to heaven. Chinese emperors were known as the Son of Heaven. During their reign they often passed through the sacred road to the sacrificial altar in order to converse with heaven. After their death, the funeral procession also took the path through the Sacred Road as a symbol of the passed emperor 's journey to heaven in the afterlife.

Changling Tomb: Fifty kilometers northwest from Beijing City lies the Ming Tombs – the general name given to the mausoleums of 13 emperors of the Ming Dynasty (1368 – 1644). The mausoleums have been perfectly preserved, as has the necropolis of each of the many emperors. Because of its long history, palatial and integrated architecture, the site has a high cultural and historic value. The layout and arrangement of all thirteen mausoleums are very similar but vary in size as well as in the complexity of their structures.

Peking Duck Dinner: Peking Duck or Beijing Roast Duck is regarded as one of the most delicious dishes throughout the world; It is a must for most visitors coming to Beijing to have a bite.

Accommodations: Overnight in Beijing
Day 8Beijing Departure (B)
Transfer Via: Flight arranged by you

Highlights: Today you’ll visit the Temple of Heaven where the emperors worshipped heaven and prayed for peace and harvest. Then you will be escorted to the airport for your flight home.

Temple of Heaven: Located in southeastern urban Beijing, Temple of Heaven is a dignified complex of fine cult buildings set in gardens and surrounded by historic pine woods,. The Emperors of the Ming and Qing dynasties visited the complex annually and prayed to Heaven for good harvest. Now, the Temple of Heaven, as a symbol of the city, is one of the must-see attractions in Beijing and has been listed as an UNESCO'S World Cultural Heritage site in 1998.